Death In The Family

Due to The Death of a Family Member No New Posts Will Appear Until the Bereavement Process is Over.

I truly have no way of telling  how long that  will be.  I apologize, but under the  circumstances do not feel the inclination to write much less post more  news of  death and pain.
Thank you for your time and attention.
Linda C.  /  Desert Rose

Quote from the Comfort Company

Composite created with image from the Comfort Company Posted by desertrose at 6:20 PM No comments:

451 error code, inspired by Ray Bradbury's " Faranheit 451", will be used on pages censored by the government for legal reasons.

© Samantha Sais / Reuters
A newly approved 451 error code will be used on pages which have been censored by the government for legal reasons. The code number was inspired by the famous dystopian Ray Bradbury novel ‘Fahrenheit 451.’
The Internet Engineering Steering Group (IESG) approved on Monday a new Hypertext Transfer Protocol (HTTP) status – code 451 that will be seen by internet users when the page is blocked by government due to ‘legal obstacles.’

“This status code indicates that the server is denying access to the resource as a consequence of a legal demand,” the body, responsible for internet operating standards, said in a statement.

Mark Nottingham @mnot
The IESG has approved the 451 (Unavailable for Legal Reasons) #HTTP Status code; great job @timbray! #censorshiphttps://datatracker.ietf.org/doc/draft-ietf-httpbis-legally-restricted-status/ …
IESG said that it advises the authorities to include the information on who and why blocked a certain website.

However, “it is possible that certain legal authorities might wish to avoid transparency, and not only demand the restriction of access to certain resources, but also avoid disclosing that the demand was made.”

Though it said that in many cases the sites could still be accessed using a VPN or the Tor network.


Read More Here
Posted by desertrose at 10:00 PM No comments:

Parliament wasted 45,000 meals last year as tens of thousands of children go hungry across London, an MP has said.

parliament.uk
Parliament wasted 45,000 meals last year as tens of thousands of children go hungry across London, an MP has said.
New figures that reveal the staggering amount of food waste in the British parliament have prompted calls for MPs to donate their unused meals to those in need.

Shadow Commons Leader Chris Bryant called on the government to give uneaten meals to local food banks in the capital. 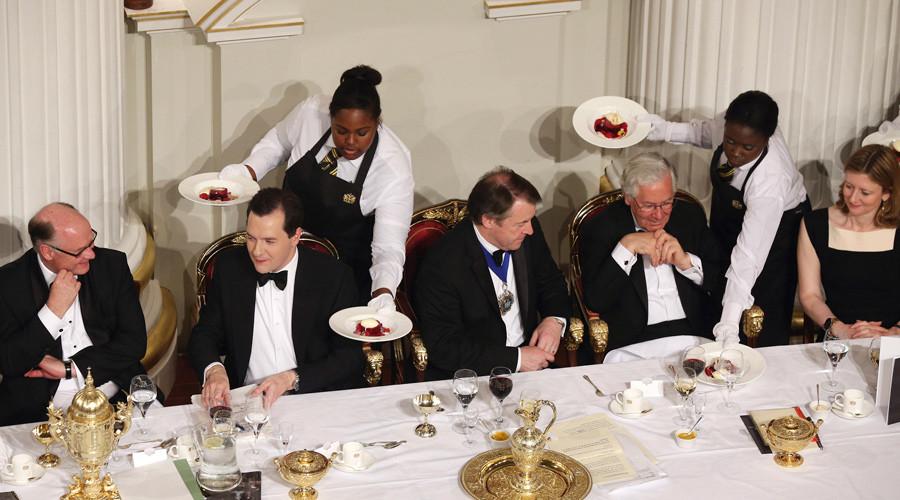 
“Last year 1.2 million sausages were sent to landfill in Rhondda Cynon Taf alone, which is why it is great that the local council is now signing everybody up to proper food recycling,” the Welsh Labour MP said.

“But new figures show that this House last year wasted 45,000 meals that were just tipped in the bin.
“With 33 Trussell Trust food banks within the M25 and an estimated 70,000 children in London going to bed hungry each night, would it not be time for the leader to institute a new scheme to donate unused food from this palace to local London food banks?”

Read More Here
Posted by desertrose at 8:35 PM No comments:

People Are Waking Up to the Dark Side of American Policing, and Cops Don’t Like It One Bit

Pushing back against a creeping police state.
By Matt Harwood / TomDispatch
If you've been listening to various police agencies and their supporters, then you know what the future holds: anarchy is coming -- and it's all the fault of activists.


In May, a Wall Street Journal op-ed warned of a "new nationwide crime wave" thanks to "intense agitation against American police departments" over the previous year. New Jersey Governor Chris Christie went further. Talking recently with the host of CBS's Face the Nation, the Republican presidential hopeful asserted that the Black Lives Matter movement wasn't about reform but something far more sinister. "They've been chanting in the streets for the murder of police officers," he insisted. Even the nation's top cop, FBI Director James Comey, weighed in at the University of Chicago Law School, speaking of "a chill wind that has blown through American law enforcement over the last year."


According to these figures and others like them, lawlessness has been sweeping the nation as the so-called Ferguson effect spreads. Criminals have been emboldened as police officers are forced to think twice about doing their jobs for fear of the infamy of starring in the next viral video. The police have supposedly become the targets of assassins intoxicated by "anti-cop rhetoric," just as departments are being stripped of the kind of high-powered equipment they need to protect officers and communities. Even their funding streams have, it's claimed, come under attack as anti-cop bias has infected Washington, D.C. Senator Ted Cruz caught the spirit of that critique by convening a Senate subcommittee hearing to which he gave the title, "The War on Police: How the Federal Government Undermines State and Local Law Enforcement." According to him, the federal government, including the president and attorney general, has been vilifying the police, who are now being treated as if they, not the criminals, were the enemy.


Beyond the storm of commentary and criticism, however, quite a different reality presents itself. In the simplest terms, there is no war on the police. Violent attacks against police officers remain at historic lows, even though approximately 1,000 people have been killed by the police this year nationwide. In just the past few weeks, videos have been released of problematic fatal police shootings in San Francisco and Chicago.


While it's too soon to tell whether there has been an uptick in violent crime in the post-Ferguson period, no evidence connects any possible increase to the phenomenon of police violence being exposed to the nation. What is taking place and what the police and their supporters are largely reacting to is a modest push for sensible law enforcement reforms from groups as diverse as Campaign Zero, Koch Industries, the Cato Institute, The Leadership Conference, and the ACLU (my employer). Unfortunately, as the rhetoric ratchets up, many police agencies and organizations are increasingly resistant to any reforms, forgetting whom they serve and ignoring constitutional limits on what they can do.


Read More Here
Posted by desertrose at 12:14 AM No comments: Saudi Arabia Creates Anti-Terrorist Coalition to Save Face in Mideast

Recently, Saudi Arabia announced it was creating a coalition of Muslim countries to fight terrorism. Such a plan was initiated by Riyadh's intention to restore its position in the Middle East. © AP Photo/ Mosa'ab Elshamy
Is Saudi Anti-Terror Coalition Created to Challenge Russia, Iran in Syria?
Saudi Arabia’s call to arms has gained supporters. As of now, 34 nations have expressed their interest in joining the anti-terrorist Muslim coalition Riyadh is forming.Among them are countries with a majority of Shiite or Sunni population, including Jordan, the UAE, Palestine, Tunisia, Libya, Egypt, Qatar, Yemen, Turkey, a number of African Muslim nations as well as Pakistan, Bangladesh and Malaysia. Another 10 nations said they would be ready to join the coalition in the future.
Saudi Arabia’s Defense Ministry Mohammad bin Salman did not elaborate on what measures would be taken against terrorists. He only said that a headquarters will be established in Riyadh to "coordinate military operations."

Read More Here
Posted by desertrose at 11:39 PM No comments:

Iraqi Commander - A mobile phone found with one of the killed ISIL ringleaders contain messages from the Turkish intelligence agency proving that Ankara supports and provides security to ISIS.

He said that the mobile set and history files contain messages from the Turkish intelligence agency which show that Ankara supports the ISIL terrorist group through providing security at the points of entry used by ISIL militants from Turkey to Iraq.

"The mobile phone also contains other important information which cannot be disclosed now, and it has been delivered to the specialized security groups for further scrutiny," Ma'mouri said.

Read More Here
Posted by desertrose at 8:26 PM No comments:

"It's a bargain" drug gouger, Martin Shkreli, 32, has been arrested on charges of securities fraud and running a Ponzi scheme to pay off debts from an old company

SHAMED AT LAST: AIDS-drug gouger Martin Shkreli is marched to court by FBI after securities fraud arrest for running a Ponzi scheme to pay debts - and freed on $5 MILLION bond

Shkreli, the son of immigrants, was also forced to forfeit his passport.

The price-hiking pharmaceutical entrepreneur was picked up by the FBI in the early hours of Thursday following an investigation into a former hedge fund and drug company he previously headed.

It is alleged he illegally used stock from the biotechnology firm Retrophin Inc. to pay off debts related to his struggling hedge fund and to pay back angry investors.

He is being charged with seven counts of fraud for running what United States Attorney Robert L. Capers of the Eastern District of New York is calling a Ponzi scheme.

Shkreli, 32, pleaded not guilty to these allegations.

He faces a maximum sentence of 20 years in prison if convicted on all charges. Read More and Watch Video Here
Posted by desertrose at 11:21 PM No comments:

Due to the social nature of this site, it may contain copyrighted material the use of which has not always been specifically authorized by the copyright owner. We believe this constitutes a ‘fair use’ of any such copyrighted material as provided for in section 107 of the US Copyright Law. In accordance with Title 17 U.S.C. Section 107, the material on this site is distributed without profit, to those who have expressed a prior interest in participating in this community for educational purposes. For more information go to: http://www.copyright.gov/title17/92chap1.html#107. If you wish to use copyrighted material from this site for purposes of your own that go beyond ‘fair use’, you must obtain permission from the copyright owner.

Any materials (ie. graphics, articles , commentary) that are original to this blog are copyrighted and signed by it's creator. Said original material may be shared with attribution. Please respect the work that goes into these items and give the creator his/her credit. Just as we share articles , graphics and photos always giving credit to their creators when available. Credit and a link back to the original source is required.

If you have an issue with anything posted here or would prefer we not use it . Please contact me. Any items that are requested to be removed by the copyright owner it will be removed immediately. No threats needed or lawsuit required. If there is a problem and you do not wish your work to be showcased then we will happily find an alternative from the many sources readily available from creators who would find it amenable to having their work presented to the subscribers of this feed.

Thank you for your time and attention, blessings to all :)